“Approaching a personage like Yuki-Onna – Dracula comes inevitably to mind, and very few others – is like walking into a maelstrom or an inferno.  Or the heart of a star.  They shine such eternal light or exert such gravitational pull that everything else is dull, shriveled or crushed out of shape.  Your senses betray you and – even without Christina telling you very precisely in your head – you feel you’re displaced in yourself.  For most of your life, you wonder if you’re imagining them but, nearing their presence, you start to wonder whether they’re imagining you.” – Genevieve Dieudonne, Anno Dracula 1899: One Thousand Monsters

“The first expression you learn in any language is their insult for everyone else.  G-words: gringo, goy, gweilo, giaour, gentile, gadje.” – Genevieve Dieudonne, Anno Dracula 1899: One Thousand Monsters

“If anything, Majin has found a way to make suicide horrible again.  What I’d seen in the park can’t help anyone’s karma – not those who died, those who feed off them, or those who watch in horror. Only the Demon Man comes out ahead, and I doubt he gives a fig for Lord Buddha.” – Genevieve Dieudonne, Anno Dracula 1899: One Thousand Monsters

“There are no vampires in Japan.  This is the position of the Emperor.”  This isn’t entirely true, but who’s going to argue with an emperor?  The year is 1899.  Vlad Dracula has been run out of Britain and with his ouster, has come a purge of the remaining undead, in the British Empire.  With all other ports closed to them, Genevieve Dieudonne, Kotaski and other vampiric refugees of England and the West have only one place left to turn.  But Japan has its own horrors and “safety” is a relative term, as our western monsters soon find themselves caught up in a war between Fire and Ice.

This latest addition to the Anno Dracula tale weaves a picture of vampiric life before The Impaler ascended to Prince Regent with the immediate fall out of his flight from England.  It introduces us to a menagerie of new vampire bloodlines and other outlandish creatures, that would be right at home in Miyazaki’s bath house or in Wicked City.  From the streets of Paris to the Temple of One Thousand Monsters, no place is safe, for the living or the dead.

I really liked the general use of yōkai, which is a term for ghost or phantom.  That the yōkai are a class of Japanese monsters is an appropriately vague term for the various kinds of creatures our exiles find, when they reach Japan.  It’s not entirely clear if all yōkai are vampires.  But what is clear is that – with few exceptions – all Japanese vampires are yōkai, which introduces many new varieties of vampiric powers.

There’s also the very early implication that Yuki-Onna is the one vampire elder that stands between Dracula and total world domination. This is played out beautifully and in a way that I suspect could become pivotal, in future books.

I loved the inclusion of Drusilla, in this novel.  Her brand of crazy was a welcome addition to the strangeness of the environment created in Yōkai Town.  Being a huge Anne Rice fan, I loved the subtle and overt references to the Vampire Chronicles, as well as to Phantom of the Opera.  There’s also a very particular one-eyed sailor and four frog-like kappa who wear turtle shells and wielded very specific weaponry.  If anything, One Thousand Monsters makes me wish I’d brushed up on my anime and Japanese cinema knowledge, as that would have been helpful.  But the lack doesn’t detract from the story, itself.

Unlike previous books, we’re getting this story mostly in the first person, from Genevieve.  Two thirds of it is written as a briefing, of sorts, to the Diogenes Club, with the other third written from Kotaski’s point a view.  Gene drops a few names of people she’s known, throughout history (fictional and non) that make me giddy with geeky glee.

The thing I’m most happy about is that the story doesn’t seem to conclude too suddenly, as has been the case with previous additions to the series.  There is a definite build up and once you hit the top, the ride is a blast, this time and this is one of the more satisfying endings, in the entire series, so far.

So there was a bit of confusion, when this book was first listed for preorder.  The book was originally listed as “Anno Dracula 1999” up until it actually dropped, so I thought this was a continuation of the story, after Johnny Alucard.  And while I was hoping for some interesting Y2K shenanigans, I confess that that was my only disappointment with Anno Dracula 1899.  Furthermore, I have my suspicions as to why this one was published now.

If you been following the misadventures of Miss Dieudonne, so far, then yes.  Definitely pick this up.  It’s a much shorter book, than previous offerings, but that helps make it a very fast read. Chronologically, this is technically the 2nd book, in the series (3rd, if you count the other 1899 book, which is a series of short stories, in the same universe).  But don’t hold that against it.  Anno Dracula 1899: One Thousand Monsters is a gruesome but fun read. 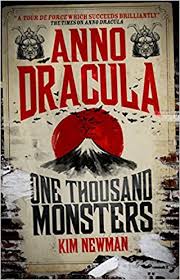