“There was the Dracula of the histories, the Dracula of Stoker’s book, the Dracula of this film, the Dracula of the Transylvania Movement.  Dracula – the vampire and the idea – was vast. But not so vast that he could cast his cloak of protection around all who claimed to be his followers.  Out here in the mountains where the Count had passed centuries in petty predation, Kate understood that he must in himself have felt tiny, a lizard crawling down a rock.” – Anno Dracula: Johnny Alucard, by Kim Newman

“Richard, you weren’t there during the Terror.  When people like Meinster and people like Ruthven, are in charge, people like you, and people like me, get shoved into locked boxes.  It happens slowly, without a revolution, without fireworks, and the world grows cold and hard.  Ruthven’s back and you’re supporting Meinster.  How long will it be before we start praying for Dracula?” – Kate Reed, Anno Dracula: Johnny Alucard

“‘No,’ he concluded, almost sadly.  ‘Gene, I have never been accused of lack of ego.  My largeness of spirit, my sense of self worth, is part of my act, as it were.  The armour I must needs haul on to do my daily battles.  But I am not blind to my situation.  No producer in his right mind would bankroll me to such an extent, would offer me such a deal. Not even these kids, this Spielberg and that Lucas, could get such a sweetheart deal.  I am as responsible for that as anyone.  The studios of today may be owned by oil companies and hotel magnates, but there’s a race memory of that contract I signed when I was twenty-four and of how it all went wrong, for me and for everyone.  When I was kicked off the lot, in 1943, RKO took out ads in the trades announcing their new motto, “showmanship, not genius!”!  Hollywood doesn’t want to have me around.  I remind the town of its mistakes, it’s crimes.” – Orson Welles, Anno Dracula: Johnny Alucard

Published in 2014, Anno Dracula: Johnny Alucard is the fourth installment, in the alternate history now known as Anno Dracula.  It’s also Newman’s most wide ranging, both in time and distance covered.

Spanning 1976-1991 and from Romania, to Los Angeles and back again.  Anno Dracula: Johnny Alucard is a collection of shorter novellas that have been reworked into a more sprawling story of the decades after the death of the legendary Vlad Dracula.  But while the Count may have died the true death, can someone such as Dracula ever truly die?

It’s the age of sex, drugs and rock and roll.  There’s a new player in town, a new drug on the market and Dracula films are all the rage.  It’s the age of “Greed is good.”  And it’s good to be the one pulling the strings.  As in Dragnet, many of the names (Barbie the Vampire Slayer, the Church of Immortology, Captain Gardner, etc.) have been changed, to “protect the innocent”.  Or have they?

I like how Newman has strung all of these novellas into a more sweeping story.  It gives a definite sense of a long game being played by our newest character, Mr. Alucard.

I’ve actually read the fourth novella, as part of a different collection of vampire stories.  It’s nice to see how it was reworked into the thread of Johnny Alucard.  And now the references to the “Coppola Dracula” make sense.

As with the previous novels, this book is rife references to contemporaries of the latter half of the 20th Century.  Where else can Lestat and Timmy Valentine headline a concert?  Or The Dude hang out with Moondoggie?  Ah yes!  It’s nice to finally find out that my favorite Brat Prince survived the Terror of 1888.  It’s also nice to find out that Commander Hamish Bond survived his ordeal, in the previous novel.  And while I’m a huge Buffy fan, I am irreverent enough in my fandoms to find how Newman turned the character on her head pretty funny.

The bonus, with Johnny Alucard is that we’ve moved into the 1980’s (I have to specify because we started in the 1880’s).  So not only is there even more of the vampire fiction I’ve become addicted to, over the years.  But now we are dealing with the history and fiction that I grew up with.  And that’s just cool.

I’ll admit that the first novella is a bit odd.  It’s essentially a retelling of how Apocalypse Now got made…  Except Coppola is making Dracula, instead.  There are the same anecdotes about incidents from the filming of Apocalypse Now, but the crew is in Romania, not the Philippines.

So the first short story reads like Coppola is trying to do an adaptation of Heart of Darkness, but with characters from Dracula, and cast with the actors from Apocalypse Now.  I realize that this is probably my issue, in that I’m so familiar with Dracula, in general and such a fan of the real Coppola’s 1992 film.  However, it’s still hard to get my head around the weird melding of Apocalypse Now and Dracula.  It makes sense, later on.  In that the Welles version of Dracula, from later in the book, has shades of Citizen Kane, so there is a pattern.  But the first novella was a bit hard to get through.  Fortunately, the rest of the book doesn’t suffer from this issue.

Also, unlike the reprintings of the previous three Anno Dracula novels, this one does not include an appendix and call me lazy, but I found that a bit disappointing.  There are a few people and incidents mentioned that seem very familiar, but I can’t quite figure them out.  Fortunately, that’s what the internet is for.

If you’ve read and liked the previous Anno Dracula novels, yes.  If you like conspiracy theories and murder mysteries, and grew up in the 80’s, I highly recommend this book. 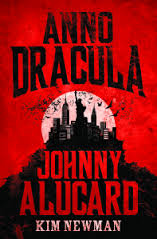